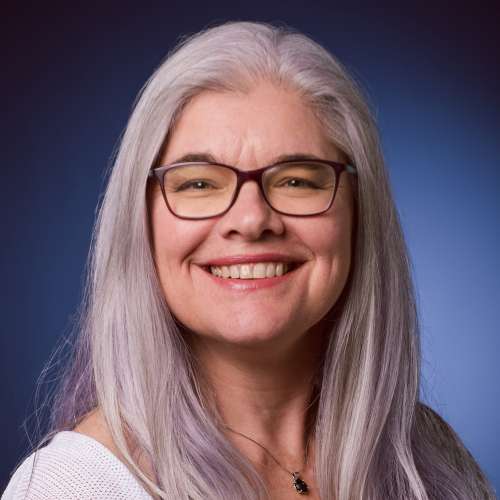 Gretchen is a cosmic mineralogist / astro-geologist using the chemistry, mineralogy, spectroscopy, and petrology of meteorites to understand the formation and evolution of asteroids and other planets. She got her Ph.D. at the University of Hawaii, Manoa in 1997 (it was a hardship…. ;D). Her research focussed on a rare group of meteorites that offer a snapshot into how the planets differentiated. After this, she held a number of post-doctoral positions that broadened her knowledge base, from determining the surface composition of Saturn’s moons to looking at how water/ice interacts with silicates on small bodies. She has worked at both the Smithsonian Museum of Natural History and The Natural History Museum in London as a researcher. More recently she has turned her attention to leading a group that applies Machine Learning to planetary imagery to extract Big Data to explore the surface geology and history of bodies in our solar system. She joined Curtin in 2012 as a Senior Lecturer. She was awarded a Senior Curtin Research Fellowship in 2014. She currently holds an Australian Research Council Future Fellowship. She is a founding member of the Space Science and Technology Centre as well as Deputy Head of the School of Earth and Planetary Science. She has an asteroid named after her (6579 Benedix) which will never come close to hitting the Earth.